This post is from a very special guest – my husband, Randy. Before we started dating, I wasn’t much of a BBQ fan, but that has changed. However, he is still the King of BBQ in this family. One of Randy’s favorite places to get good BBQ ribs is in a very small town here in Kansas.

Two things happened in 1975 that surprised most folks. Probably most surprising to the casual observer of my life is that I somehow managed to escape the sirens’ song on the rocky shoals of Aggieville and get my political science degree from KSU. You laugh, but much better men than me floundered on those shores. But that is another story.

Another event of much more import to the culinary world occurred that year in the wonderful little berg of Williamsburg, KS. Guy and Mae started a tavern there and began to sell ribs. This fine little establishment, inexplicably called “Guy & Mae’s Tavern,” is rib mecca for those in the BBQ know. As you head northeast on 1-35 toward Kansas City you pay your toll at Emporia as you gradually leave the flint hills. Little does the uninformed traveler know that a mere 40 miles up the road toward Kansas City is BBQ heaven. Williamsburg is about 15 miles southwest of Ottawa as the buzzard flies, and it reached the big time when it got its own exit off I-35. At last count it had 191 females, 166 males, 5 registered sex offenders–and Guy & Mae’s Tavern.

How could you not be excited when you pull into town and are greeted by the sign at left.
Friendly people, indeed (not so sure about the sex offenders). 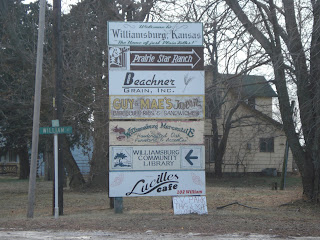 Turn east down the main street and soon the best ribs in Kansas will be staring you right in the face. 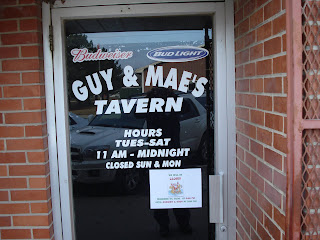 As the Princess and I sauntered into the bar that Saturday afternoon the crowd had thinned a bit and we had our choice of booths. Styx thanked Mr Roboto on the juke box (come on, sing with me “Domo Arigato, Mr. Roboto”) as a dad showed his son the finer points of a bank shot. We elected for a fine booth at the back so I could get closer to that heavenly smell that emanated from the rear of this bar/rib joint.

The decore’ is any small town beer joint in the midwest. Same friendly lady that is always behind the bar. Same Coors sign welcoming K-State fans. New sign extolling the virtues of KU football (“KU FOOTBALL–A Tradition since Last Thursday). However the difference between this bar and any of thousands of others across this state will soon be at your table-wrapped in aluminum foil. I have no idea how they do this because I have tried a hundred times, but the ribs are so tender the meat literally falls off the ribs when you touch them. 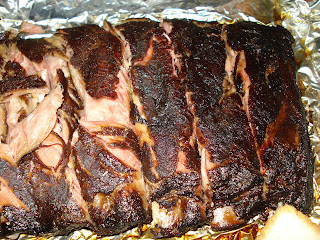 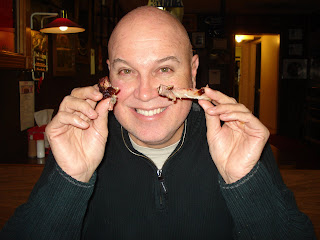 The Princess and I went back and checked out the pit. First they get a good smoke on the ribs, then they wrap them in foil and get them good and tender. Holy pig they are good. 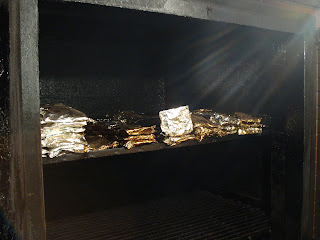 Since 2009, I’ve taught cooking classes out of my kitchen in our 1924 historic Mediterranean Revival home nestled in the heart of College Hill in Wichita, Kansas. My passion for entertaining comes … END_OF_DOCUMENT_TOKEN_TO_BE_REPLACED

Since 2009, I’ve taught cooking classes out of my kitchen in our 1924 historic Mediterranean Revival home nestled in the heart of College Hill in … END_OF_DOCUMENT_TOKEN_TO_BE_REPLACED