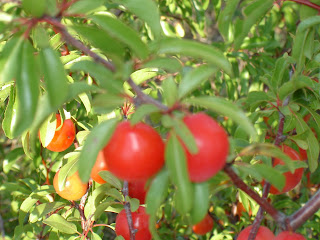 Prior to late last year, I’d heard of sand plum jelly, but never had the delightful experience of tasting it. Rememeber when I posted back in November about Joe Stumpe writing a story about my cooking? Well, between that article, a few emails and a couple jars of sand plum jelly – I’ve made a new friend named Brent Patty.

Brent sent me an email and said he wanted me to try his jelly, and give him my honest opinion. Being right around the holidays, I didn’t get back to him really quickly. He thought I didn’t like it – but he was definetely wrong. It’s divine. Even though my GG (dad’s mom) makes amazing strawberry jam, I’ve never tried making it myself. The greatest part of sand plum jelly is the sweet to tart ratio is just perfect to my taste buds. I normally don’t eat a lot of jellies or jams because of all the sugar. Brent’s sand plum jelly I make an exception for, just like with my GG’s.

Brent and I exchanged several emails back in December to discuss how he got into the sand plum jelly business (it’s really just a hobby, but he does it on a large scale). He lives outside of
El Dorado on the family “farm”. Growing up he always looked forward to his grandmother’s sand plum jelly.

Below are a couple excerpts in Brent’s words about his delictable jelly:

The wild plums were getting hard to find, so I planted a few trees. I ended up planting 400 sand plum, 200 american plum and 200 beach plum trees. Last year was good and I picked a couple hundred pounds. I make jelly for friends and family and actually sold some at a local business.

My grandmother made the jelly from plums on her farm and what she picked along the road. The plums grow wild and are native to Kansas. The trees did not produce fruit every year so it was always a treat.

It had been several years (probably twenty plus) since I had eaten any sand plum jelly when my wife Sharlene started going to the local farmer’s market, and purchased a jar. The memories of picking plums with my grandparents, and the great taste of the jelly made me yearn for more. The next year I put many-a-mile on the old Dodge pickup looking for wild plums. To my delight I found many. However they are hard to pick because of the thorns on the trees and their locations in overgrown ditches. I then decided I would plant my own orchard and grow them like trees instead of the thickets, which is how they are found in the wild. This work well, and by the third year I was picking plums morning and evenings without the usual hassles. In my research of the plums I discovered most of the wild plums around here are the American plum. The are not as tart as the sand plum so I decided to plant two hundred of each. The sand plums also seem to produce more fruit per tree. I also planted one hundred beach plums which grow wild on the east coast. That concluded the South orchard. The following year I planted two hundred more sand plum trees in what I call the North orchard.

The seven hundred trees take a lot of time to prune and mow around,so I am considering letting them grow into rows. We usually start picking in June and continue as they ripen into September. I use the recipe I believe my Grandmother used from the Certo insert. The fruit is frozen whole after picking. I use a steam juicer when I am ready to make the jelly. I pretty much make it to order so it is fresh and clear. I need to do more monitoring of the fruit sugar because I can make a very tart jelly from slightly less ripe fruit or a sweeter blend from the fully ripened fruit. I would like for you to try the glaze I made for ham to see what you think.

We mostly eat the jelly on toast, biscuits, french toast, pancakes and good old peanut butter sandwiches. I have also made jam, which is a lot of work, syrup and wine. As I previously mentioned I sell some locally at Hudson’s Gardens. I have two freezers full of fruit so I need to either market the jelly, start a you-pick, or sell the fruit for winemaking. In any event, I should have all the sand plum jelly I want:). 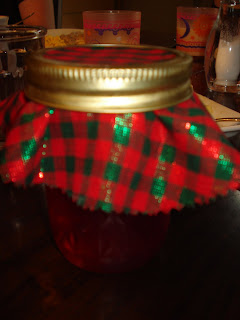 The darling jar my sand plum jelly came in. 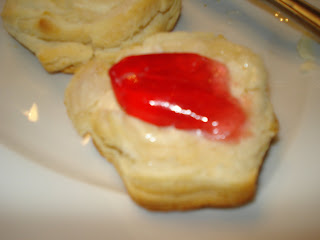 On my biscuit, ready to be eaten!

I’ve been hoarding my sand plum jelly, so I still have a bit left. And I’ve made a new friend named Brent. I really enjoy the connections my love of food make for me.

Since 2009, I’ve taught cooking classes out of my kitchen in our 1924 historic Mediterranean Revival home nestled in the heart of College Hill in Wichita, Kansas. My passion for entertaining comes … END_OF_DOCUMENT_TOKEN_TO_BE_REPLACED

Since 2009, I’ve taught cooking classes out of my kitchen in our 1924 historic Mediterranean Revival home nestled in the heart of College Hill in … END_OF_DOCUMENT_TOKEN_TO_BE_REPLACED